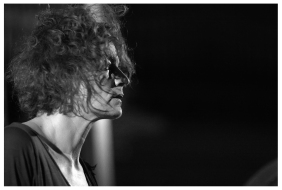 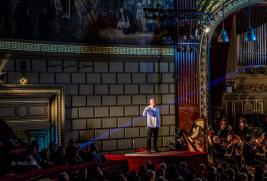 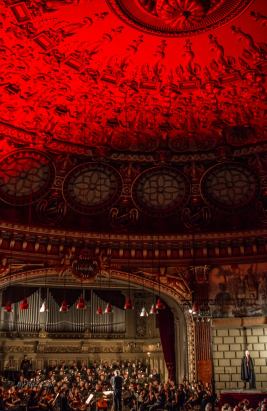 The 3rd of November 2011 ‘George Enescu’ Philharmonic Orchestra concert conducted by Christian Badea, comprised musical works of a great beauty: The Prelude of Parsifal by Richard Wagner, The C Major Concert for Piano and Orchestra, K.V. 467 by Wolfgang Amadeus Mozart, soloist Constantin Sandu and Symphony No 1 in D Major by Gustav Mahler. We witnessed an evening music performed at a remarkable artistic level. Conductor Christian Badea is a beloved guest of the Bucharest public, a musician who knows how to enforce respect.

The genesis of the opera Parsifal is connected, on one hand, to the composer’s spiritual experiences around the celebration of Good Friday, and on the other hand, to the poem Parzival by Wolfram von Eschenbach. The plot of the opera refers to the Grail knights, a legendary order of monk knights guarding Montsalvat, the cup from which Christ drank as he was crucified on the cross. Unable to resist the witchcraft of sorceress Kundry, the head of the Grail knights, Amfortas, breaks his chastity vows and so he cannot give the knights their communion, which provided them with an invincible power. Young Parsifal reaches Klingsor’s enchanted garden, the symbol of evil, a great sinner who had not been accepted in the order of the Grail knights. Parsifal stands up beautiful Kundry and he pulls down Klingsor’s castle with the help of the spear lost by Amfortas. He is chosen the king of the Grail, in Amfortas’ place, and for the first time he performs the mass of the Holy Chalice which all the Grail knights attend.

The Prelude music of the opera Parsifal is mainly gone through by the leitmotiv of the communion and that of the Grail. The ‘George Enescu’ Philharmonic Symphonic Orchestra, under the baton of the maestro Christian Badea, offered the auditory moments full of flowing harmonies, in which the infinite melody prevailed over the sensible world.

Hans Jürgen Syberberg is the author of a filmed version, where Wagner’s opera is fully unfolding in a very significant scenery: Mahler’s death mask.

After the Wagnerian Prelude, we listened to The C Major Concert for Piano and Orchestra, K.V. 467 by Wolfgang Amadeus Mozart, glamorously and neatly performed by Constantin Sandu.

The artist studied the piano at the ‘George Enescu’ Musical National College in Bucharest, with the teacher Constantin Niṭu, then at the ‘Ciprian Porumbescu’ Musical Conservatory in Bucharest, with Constantin Ionescu-Vovu. Later on, he benefited from the guidance of some great personalities like: Tania Achot, Dmitri Bashkirov, Sequeira Costa and Helena Sá e Costa. The pianist is a laureate of International Contests of Senigallia, Łódź, Viotti-Valsesia, Palma O’Shea – Santander, Épinal and Maria Canals-Barcelona.

Constantin Sandu has been the soloist of some important European orchestras like: Arthur Rubinstein of Łódź, the Halle Philharmonic, Bodensee-Symphonie-Orchester of Konstanz, the National Orchestra of Belarus, the Kiev Radio and Television Symphonic Orchestra, the National Philharmonic of Moldova and the National Orchestra of Porto. Also, Constantin Sandu has been invited to be part of numerous juries of international contests (Vianna da Motta-Lisabona, Cidado de Porto, Ciudat de Toledo, Viotti-Valsesia, Pinerolo-Città della Cavalleria, Helena Sá e Costa-Aveiro, Propiano-Bucharest and Yamaha Music Foundation of Europe-Porto). He has taught mastery courses in different countries. The pianist has obtained the title of Doctor in Music at the Bucharest National University of Music. He has made various radio and TV recordings, and he has also released CDs as a soloist. At the moment he is the manager of the music department at the University College of Music and Dramatic Arts in Porto (Portugal).

When performing in Bucharest, at the Romanian Athenaeum Hall, Constantin Sandu impressed the public with the elegance of phrasing and his really velvety touch. The artist accomplishes the legato with a great delicacy, in the cord manner. His sound was gold plated. In performing the interval vaults, the pianist displayed a certain naturalness, the necessary effort applied reminding of the vocal technique (a slight hesitation perfectly well-balanced). In the section which concludes the second part of the concert, the soloist synchronized the conveying manner of staccato with the pizzicato of the cords in a unitary levelness. As for the third part, those imitations, true ‘polyphonic relayings’, had a peculiar expressivity. The Mozartian musical motifs suggested some opera characters. The accuracy of the articulation – a minutely dosed polishing, unostentatious, with a consequent rhythmical pulsation – also focusing on the sonorous detail contributed to the impression of musical beauty. In the soloist cadence, the artist reiterated the themes, with the related variations, using an agogic in which the aesthetics and the classic style combined.

The orchestra backing suited the soloist: alive in the tutti’s, careful in following the soloist, with a dynamics always adapted to the moment and with a great warmth in the cantilenas. At the public request, the pianist Constantin Sandu performed Rondo alla turca in A major by Mozart, rousing prolongued applauses.

In the second part of the musical evening at the Romanian Athenaeum Hall, we listened to the Symphony No 1 in D Major by Gustav Mahler. The orchestration of this symphony is a huge one, of almost 100 players on stage. The cord debut in pianissimo sounded impressive, after which the intervention of the woodwind came ‘from afar’’. You could then hear the delicate moment of self-citation, in which the musical idea of the composer’s lied appeared, entitled Ging heut’ Morgen übers Feld/ This morning we walked over the field, initially performed on the cello, after which the entire orchestral assembly was comprised. Conductor Christian Badea managed to imprint that fiery character, but also humorous sometimes, especially in the section of the sonata reprise of the first part. In the second part, Kräftig bewegt, doch nicht zu schnell, one could fully sense the dancing character – landler in the three quarter beat. The cello part was played in a more severe manner, as imposed by the conductor. His determined gestures suggested clearly the expression. The interventions of the first violin, with a downward trend, stuffed with a glissando, on the solemn cord, were toned with a great accuracy in the spirit of the klezmer, belonging to the Jewish music. Besides, the percussion backing especially the cymbal timbre, was humorously performed. In the slow third part, the suggestion of a hunter’s funeral, with the respective animal convoy, appeared more strikingly. The bass fiddle solo was followed by the bassoon and the tuba, everything in a well graded crescendo. The famous song Frère Jacques could be heard in this part of the symphony, but performed here in a minor tonality. The end of the symphony No 1 by Mahler came as the climax of the evening. From the first thunder of the percussion up to the recurrent themes of the previous parts, huge tensions kept accumulating. The brasses had a very good performance. At the end, the entire party of horns stood up, playing in fortissimo with a quality round sound. The musical material from the beginning of the orchestra reappeared seeming to balance a ship in a dangerous rocking on a stormy ocean.

We attended a wonderful show which for some time has very intensely enlightened the path of my daily life, darkened by all kind of worries.

Add
Enable Notifications    OK No thanks